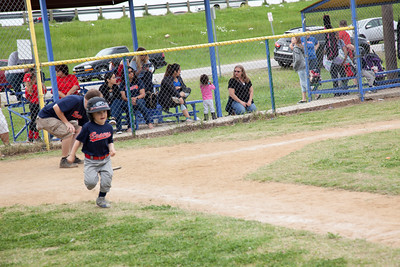 No matter the game, practice is the crucial element that makes a professional out of a rookie. Especially when training with kids, these sessions will build the foundation of their future skillset.

The aim of each practice session is to ensure that the kid improves in performance and stays interested in the game.

Kids tend to have high energy levels but they also have a very short focus span. Due to which they can perform any workout or drill easily and get bored of repetitive workouts soon.

The key with finding effective teeball drills is to harness the high energy of your players while keeping them paying attention.

Teeball Practice Drills to Use

As a coach, it can be hard to come up with different drills every day. Moreover, you also need to ensure that the drills have minimum chances of injury.

To help you out in this scenario we have compiled few amazing teeball drills that can work wonders for the tiny tots.

At this age, excessive body exercise can make the kids strong and also build other performance traits like speed, agility, and endurance. Running the bases is a great simple exercise that’s perfect for teeball practice.

All you need is a stopwatch and a baseball diamond.

Line up all the kids at the hitting plate and let them start by jogging and touching all the four bases. 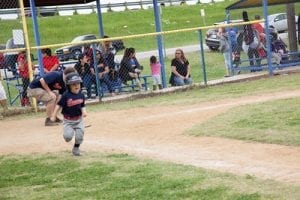 Start the drill by sending a player sprinting towards the first base when you say ‘go’.  When you say go again, the first player runs to the second base while another player sprints and takes his or her place.

Continue this till all the players have reached the home base.

You can tell them the time they took to run from one base to another when they change the base.

To make the drill more interesting you can keep the other coaches at the different bases and throw a ball at any of them as the kids run.

This will give them real game-like experience and improve their reflexes which will benefit them in the long run.

Catching the ball is a very important part of baseball and kids should learn it from a very young age. This teeball drill helps the kids not only to catch a ball but also how to throw it at varying distances.

To begin, you can tell every player to pick a partner and make them stand 10-feet apart. If you have an odd number of players you can become a partner for a player. Once the players are in the position, you can ask them to throw the ball when you whistle or say ‘go’.

Before you start the drill, explain the fundamentals of how to throw the ball in detail and have each player try it step-by-step.

You can make this drill fun by giving each pair a number and only throw when their number is called. Before the drill starts, definitely make sure that all kids have their gloves on.

This drill has many versions that vary at the end but start in a similar way. Divide the players into two groups and make them stand on either side of the line. Put different objects on each side but remember the number of objects should be same. And place two boxes at the home base. 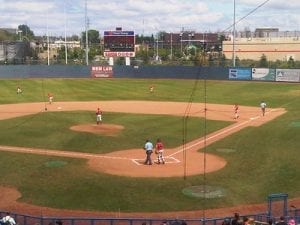 Instruct the players that when you say go, they have to pick the objects and put them in a box that belongs to their side. You can set a timer of preferably 60 seconds for the drill. At the end of the drill, the team with the most number of items in their box wins.

However, another version of the game does not involve boxes. Instead, the players have to throw the objects on the opponent team’s side. The side with the least number of objects wins.

When doing the second variation of the drill, it is necessary that you instruct the players to throw the objects above and around the players.

This drill minimizes the amount of downtime of the players and keeps them engaged in practice. For this drill, you will need assistant coaches. Divide the players in the group of 3-4 and let them get engaged in the mini drills mentioned below:

It’s always a good idea to include batting practice in any list of the best teeball practice drills. Let the first group practice batting with a tee, if you are doing well, try shifting them to soft toss. There might be instances when some players might get frustrated due to their inability to hit the ball, to which you can help them out with a dodge ball. 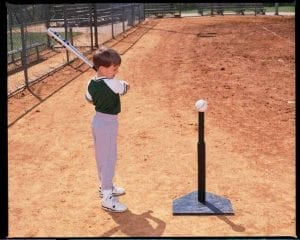 This drill is the best way to teach every player about batting mechanics. Give them instructions on foot distance, hands back and a good hitting position.

Once they get well-versed with the technique you can teach them, in-depth mechanics, like adding a swingto the strike, coming through the hitting zone with a level plane or following through.

Teaching kids fielding may not be easy but this teeball practice drill can help. Remember, that there is a chance that most of them may fear the flying ball. Hence, to teach them fielding, you can start from grounders and, once they’re comfortable, start hitting some pop flys to them. 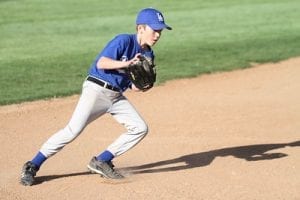 You can also teach them to catch the ball with both hands by throwing ground balls. This practice will enable them to get a good grip on the ball when fielding. Especially straight balls and mid-air catches.

Even the elite baseball players consider stretching and bodyweight exercise as an essential part of the training. You can get your team to do the different stretching exercises after training or include simple exercises in the drill.

To learn baseball stretching you can watch this video:

Pushups, sit-ups, and jumping jacks can be great ideas for players of this age. It can help strengthen the muscles and keep the joints fit.

Another great teeball practice drill, this is a fun and easy game that you can play with the kids. It is also simple for the coaches;all you have to do is stand with other coaches near the bases. The drill is about the jeopardy of the players that get stuck between the bases.

You can tell the players to go one at a time or let them go all at once. You and your assistant have to tag each player till they all go down.

If you are training for the T-ball leagues it is advised that you try creating a real hotbox like the situation with the players and train them for such situations that might occur in their lives.

To see a real-life pickle/rundown situation watch this video:

Most of the hitters who are about to enter the major leagues have a problem maintaining eye-contact with the ball. To ensure that the same doesn’t happen with your team players, you can train them with the dot drill.

Take a ball and draw a big red dot, it can be about the size of a quarter. Place the ball on the tee and let the players swing while looking at the dot. Concentrating on the dot will encourage the player to look at the dot as they have to hit at the same spot repeatedly.

Give each player 8-10 hits before moving on to the next player. The repeated number of hits can condition the players to perform better and increase their chances of hitting the mark.

If you think your team is ready for the T-ball tournaments then it is recommended that you have a cone contest drill. This activity may require some prior preparations. First, you will have to buy different colored cones and arrange them on the field at considerable distances.

You can set the cones on the four corners of the field and rate points as below:

-First Cone:  in front of the pitcher’s mound (1 Point)

-Second Cone: Halfway between the pitcher’s base and second base (2 Points)

-Third Cone: At the beginning of the outfield (3 points)

Get a player on the tee and give each him or her 4 hits. Record their score after every hit considering the point system above. The player with the highest score wins.

When training with kids you need to be active, patient, and most importantly cautious. Make sure that every kid takes sufficient rest during practice sessions wear protective gear whenever needed.

I hope that the above information helps you make your team’s training more enjoyable. If you have any queries or suggestion you can write it in the comments section below.