When speaking of baseball bats, there is hardly any company that can match the quality and performance delivered by the ones made by Easton. The company is recognized as a premium sports manufacturer by players and critics alike. 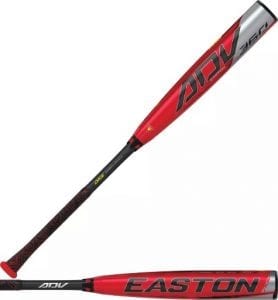 The Easton Adv 360 Baseball Bat is a pretty special baseball bat from Easton though. In this Easton Adv Baseball bat review we’ll go over all of the details of this baseball bat that make it special and spend some time on the most important thing: how it feels on the field.

What makes the Easton Adv 360 special?

Easton ADV 360 is regarded as one of the best BBCOR certified baseball bats. Its construction is a combination of numerous technologies from barrel to handle.

Adv 360 comes with a 2-piece composite construction designed to provide flex and the “whip effect” upon making contact with the ball. It has a large barrel size of 2.5/8 inches. The bat has a drop weight of -3 and is recommended for players 14 years old and above.

The barrel of the ADV 360 features Launch Composite Technology that optimizes it for impeccable performance. It has a huge sweet spot which makes hitting distant shots easier.

To learn more about the features of Easton Adv 360, you can watch this video:

The composite structure of the bat is fused with the iSo CXN™ technology which is made with the advanced Nitrocell™ foam. This unique composition isolates the handle and the barrel to give a solid feel and offer more power through the zone.

For additional comfort barrel is fitted with the Soft Knob Technology, it also adds more leverage and power to bat. The technology helps in reducing vibration from the hits and gives incredible comfort to the bottom hand.

The swing of the bat is improved with the Pro Balanced swing weight that gives the bat an optimized barrel length and balance point which gives the bat an incredible combination of power and speed. 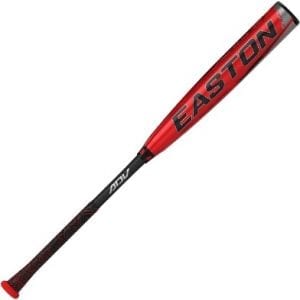 It comes with the Speed Cap™ that makes the barrel more flexible and responsive and enables the barrel to make a more natural sound on impact.

To ensure that your hands don’t feel the strain when swinging the bat and your shots go in a straight direction, the Adv 360 comes with the Dynamic Feel System™ carbon handle. The handle is made extra stiff and is customized to provide the best in class feel.

Owing to the advanced Lizard Skins™ grip the Adv 360 has a firm grip that sticks to the hands like Velcro and offers comfortable hit. It makes the handle feel soft and cushioned.

On the field with the Easton Adv 360:

Easton Adv surpasses all the expectations when put to the test. The bat has a great aesthetic appeal with colorful vinyl and a great shape. The look of the bat itself can be a great confidence booster. On holding the bat, you can feel the comfort and the balance that make the bat special.

The soft and firm grip of the bat makes ensure that the bat won’t slip from your hand and keep them in position while swinging. Adv 360’s balanced barrel works like magic on every swing and adds more power to every hit. You can feel how the great balance of the bat helps you pull through even through the toughest hits.

To watch the Easton Adv 360 perform on-field you can watch this video:

Due to its weighted barrel, it can hit some distant shots with ease. The bat also has a huge sweet spot that can handle mishits with ease. Its extended size covers the entire plate and makes you look like a pro with every swing.

It is made from composite material which generates more power and is more durable as compared to aluminum bats. There are no signs of dents or change in the sound of pop even after numerous hits.

The most remarkable thing about the Adv 360 is comfort. Every element of the bat and even the additional features incorporated in the bat are focused to make sure it’s one of the most comfortable baseball bats you’ve ever swung. 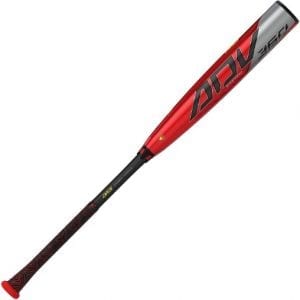 Adv 360’s balanced body and weighted barrel allow you to add exceptional speed to the swing which can be important in real-life situations.

Compared to other BBCOR Bats such as the Rawlings Quattro or the Meta, the Easton Adv 360 has a much stiffer barrel leading to better energy transfer and sending the ball further.

The Adv 360 is a much better option than some other BBCOR bats. It is much stiffer than the Quattro, and Meta which usually have softer barrels which often reduce the speed of the ball and affect the power in the swing.

Who should buy the Easton Adv 360?

As mentioned earlier Easton is known for making bats that suit each and every player’s demand, the Adv 360 is no different. It has many qualities that could be useful for different types of players.

The balanced barrel of the bat is more suitable for players who are heavy hitters and aim to score homeruns in the game. Its extended sweet spot can also help players who have just started to play baseball to avoid mishits and hit great shots.

I would recommend the Easton Adv 360 to advanced players in middle school, high school baseball players, and college baseball players. Quite simply, this is a comfortable bat that can send the ball flying. The flex is optimal and the vibration dampening reduces the traditional sting of the bat every time you make contact. 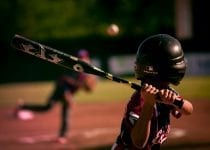 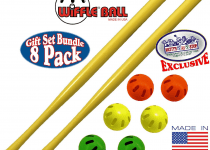