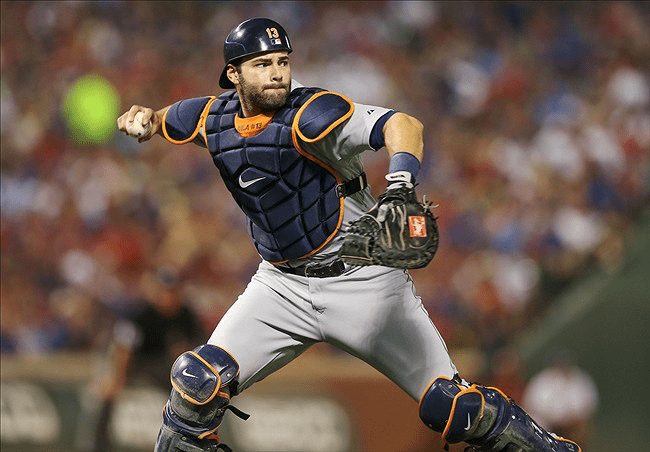 Nike is the world’s biggest sports brand, valued at $39.1 billion. The company dominates the market, leaving competitors in the dust.

When you wear Nike gear, you know you’re wearing the best of the best – and it’s not surprising that baseball players want to get their hands on Nike gear.

However, the company only makes a limited volume of baseball gear, and finding and buying Nike catchers gear can sometimes be very challenging.

So, in this post, I will give you an overview of some of the catcher’s gear that Nike makes and also give you an idea of where you can buy it from.

Many don’t know that the company wasn’t always called “Nike.” Track athlete Phil Knight and his coach Bill Bowerman first started the company with the name “Blue Ribbon Sports” in 1964.

The founders didn’t have a store initially and sold their goods at track meets out of their cars. But they were determined to grow the company, and eventually, in 1966, they opened their first store in Santa Monica, California.

In 1971, the founders decided to part ways with their supplier Onitsuka Tiger, one of Japan’s oldest shoe manufacturers, and decided to manufacture their own shoes.

They changed the brand’s name from Blue Ribbon Sports to Nike, and on June 18, the same year, they began to use the famed swoosh logo. The logo was registered with the U.S. Patent and Trademark Office later in 1974. 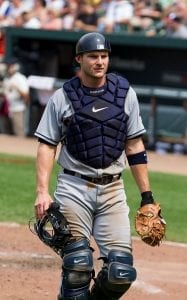 By the end of that decade, the company had burgeoned and captured over half of the country’s market share – and that’s when they decided to venture out and make other apparel and gear.

Their sales and popularity kept an upward trajectory, and in 1988, the company debuted their “Just Do It” slogan, which is still used today.

As the company grew, it acquired many popular brands, the most famous of which are Jordan, Hurley, and Converse.

It’s fascinating how the founders made their first sales from the back of their vehicles and turned the company into a sports behemoth worth billions of dollars. 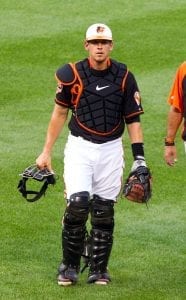 As impressive as the company’s history is, it’s more interesting to look at the company’s influence on sports in the present. While Nike is the biggest sports brand in the world, it’s also the most prominent sports sponsor.

But looking back helps understand Nike’s influence on sports and why Nike gear is so common on MLB playing fields.

You’ll notice that every athlete on the diamond has at least one piece of equipment from Nike or its subsidiary brand Jordan.

Nike equipment is most popular amongst catchers, and since the 2018 MLB season, Jordan-branded gear has become very popular, too.

You can go back and check out Yadier Molina playing that season – you’ll see that he’s wearing Jordan gear behind the plate.

Here are some other baseball superstars that were wearing Nike gear on the diamond in the 2020 MLB season:

It’s important to note that not all the gear these athletes wear is by Nike. The athletes tend to wear different equipment from different brands, and those on the list were wearing at least one accessory from Nike.

An excellent example of this is Christian Vázquez, who always wears a Rawlings catcher’s mitt, but doesn’t shy away from using other equipment from different brands.

Nike Catchers Gear – Is It Even Sold?

At this point in the post, we’ve established that Nike is a super popular brand and that many athletes in the big leagues use their gear.

You will be able to find gear like under-shirts, cleats, and wristbands at various retail stores. These accessories are mass-manufactured, and they’re available almost everywhere.

But some observe that Nike catchers gear isn’t available at a lot of retail stores.

This leads many to question if Nike catchers gear is even sold to the general public.

The good news is: Nike Catchers gear is available for purchase online.

However, if you’re looking to buy Nike for yourself or your kid, you’re going to have a difficult time.

Because the bad news is: Nike only sells baseball mitts on its website. Other catcher’s gear isn’t available on the website.

Finding listings of the gear on eCommerce sites can be difficult, too.

So, to make things easy for you, I did the research and have found some official listings on Amazon.

If you don’t see the gear you’re looking for in this post, checking eBay is your best bet.

The Pro Gold catcher’s set is the first catcher’s gear set that Nike released. The earlier versions of this lineup were extremely popular among the catchers in the big leagues, even five years ago.

Seeing Jorge Posada and Joe Mauer wear it behind the plate was common. However, the Pro Gold lineup has been discontinued, and it will be difficult for you to find authentic new pieces online. You can’t find it on Amazon. However, there is a listing of it on eBay.

The listing includes 17” leg guards and the chest protector from the Pro Gold set. You can pick from the two available colors – blue and orange.

But it’s important to note that the catcher’s glove from the set is not included in the listing.

The DE3539 collection is the newer collection and is still in production. While there are differences in the design, they are small, and the new DE3539 set closely resembles the Nike Pro Gold series.

The set is used by several major league players – a trend that’s passed on to the collection from its predecessor.

However, the set is not available online. The chest protector, leg guards, and the mask/helmet are available for purchase separately, and I discuss their features in detail below.

There’s a lot that makes the DE3539 chest protector an attractive option for players on all levels of the skill scale.

The protector has four layers of dense padding, which ensures that you’re safe on the diamond. But it manages to remain lightweight and doesn’t affect your performance on the field. 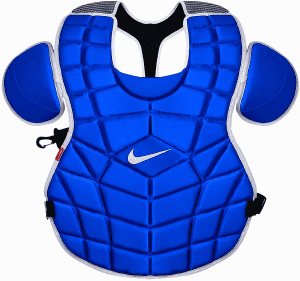 The company makes use of its double-density padding, making blocking a breeze.

Nike commits to making their gear as comfortable as possible, and the company’s efforts are evident in the protector’s design.

The chest protector’s diamond vent padding keeps you cool and comfortable on the field without compromising on safety. You’ll be cooler and safer on the field than you’d otherwise be on the diamond with the DE3539 protector on.

You can adjust the dual shoulder pad to your liking, and you can even remove it if you want.

The company calls their attractive design the “control-flex articulated design,” In addition to giving it its unique look, it also ensures that your movement isn’t restricted when you’re on the field.

The protector’s harness on the back is both comfortable and durable. It won’t irritate you during a game, which counts for a lot.

If you’re looking for lightweight leg guards that also give you the protection you need, you cannot go wrong with the DE3539 guards.

These are explicitly designed to deliver complete coverage to the catcher’s legs and keep them safe on the diamond. The guards mirror the exact shape of the legs, making the fit perfect. 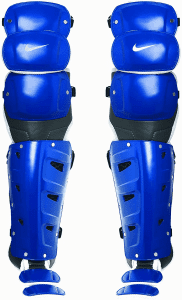 But one of the best things about the guards is the padding used. The padding wicks away moisture from the guards, keeping you comfortable through the nine innings.

The high-quality padding is only the start.

Just like the chest protector, the Nike DE3539 leg guards have strategically placed vents. These vents allow for excellent airflow, which further adds to your comfort during the game.

The guards are just as impressive when it comes to the protection they provide. The triple-layered knee caps provide you with loads of protective padding.

This gives you a lot of confidence and peace of mind when you know you’re going to need to hit the dirt hard.

Nike goes the extra mile and provides you with a conforming “knee sling,” which adheres perfectly to your tibia, enhancing the fit and giving you the protection you need.

The guards use a polyethylene shell. PE shells are extremely sturdy by nature and are used for making body armor.

Nike further fortifies the plastic – the guards can take quite the beating and still last you years.

The company offers the same three color options – royal blue, red, and navy blue. However, the leg guards are available in only two sizes – 16 and 18 inches.

The catcher’s mask is NOCSAE-approved, and its modern design features the swoosh logo on both the front and the sides.

The multi-density foam padding used cushions any hits, keeping you safe when you’re behind the plate. 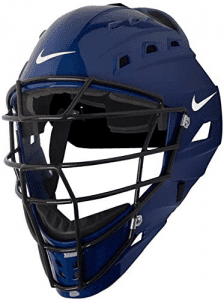 The shell does the bulk of the protecting since it is made out of ABS material. ABS is an extremely sturdy plastic that is used in several catcher’s helmets available in the market.

No compromises are made to comfort, either. The smartly positioned vents allow for proper air circulation. The chin cup incorporates a moisture-wicking fabric, which helps keep you a lot more comfortable and dryer.

If you’re concerned about your comfort in the hot weather, this is the right mask to go for.

However, the most notable mitt of them all was undoubtedly the Diamond Elite Pro II mitt. Of course, like all other Nike catcher’s mitts, it is no longer in production. 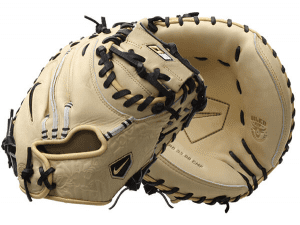 You may be able to find it on eBay, but there were no listings at the time of writing.

The 33.5-inch mitt is made from high-quality steerhide leather – it’s super durable and will last you years.

The mitt looks excellent, and the conventional open back design with the two-piece closed web seals the classy look.

The Diamond Elite Pro II was perhaps best-known for the excellent protection it supplied the player with.

It has several layers of foam padding inside it, and it cushions a lot of the force from the fast-coming ball. The ball won’t sting as much when you catch it.

The reverse welt in the finger stalls makes it comfortable to have on, which is another big plus.

It barely requires any breaking in, but what I like about it the most is the etched-in leather. It supplies an insightful look into baseball’s past.

While you will find some Nike catching gear online, a lot of it has been discontinued.

I expect Nike to keep supplying baseball stars with gear. But there’s no telling whether a new line of baseball gear will come to the market any time soon.

But the Nike catcher gear that’s available for sale is some of the best there is in the market. You cannot go wrong getting the DE3539 set – it’ll keep you safe and looking great on the diamond.